Home / About / Board of Governors / Message from the President

I am honored to send you this recap of ACRM activities and achievements in 2020. I know that for all of you, 2020 was an unprecedented year. So, I thought you might like to read some good news about what happened last year with ACRM during all of the challenges.

We saw notable growth in our mission during 2020, and while there is so much that warrants mention, I’ll limit this only to the highlights.

To begin with, we set a record for the number of webinars we launched. We shattered attendance records for live and recorded viewings. Since community groups and staff worked to incorporate advertisement slides promoting ACRM meetings and the Archives of PM&R, we were able to introduce many new professionals to ACRM.

The webinars also opened an opportunity for staff to work with our community groups to add new members. A successful integration of an autofill form helped us with tracking. Combining this innovation with an extensive social media promotion campaign expanded our reach to rehabilitation professionals and consumers. We also managed the ACRM Technology Group’s creation, development, and rollout of the Pandemic Webinar Series, and built and maintained a COVID-19 Resource webpage. All of this in 2020 expanded ACRM’s library content and allowed ACRM members to broaden their professional profiles by presenting to audiences online.

The year 2020 also opened the door to a Special Vision Cast for all groups to help guide and perfect ACRM’s vision for our first ever Virtual Annual Meeting. Using a menu of tools for meetings, we piloted Virtual Networking Meetings as they might happen during the Virtual ACRM Conference. We discovered how to include slide decks, schedules, sample agendas, theme slides, award slides, call for proposal, and even the 2021 Dallas Annual Meeting slides.

Furthermore, we saw significant progress from the ACRM Evidence Practice Committee (EPC), which includes the following:

Important strides were also made by the ACRM Communication Committee which:

We supported the ACRM Career Development Networking Group Mentorship Program by working with the task force chair to develop a standardized survey instrument for use by all community groups. This led to programming and administration of the application and evaluation surveys for the following groups:

First of all, with regard to the Annual Meeting, I am really proud of the Program Committee, Chairs Council, Executive Finance Committee and Staff for all working together to find a meaningful way to hold our annual meeting in a safe and virtual environment.

The new structure, with all content being pre-recorded before the meeting, and then also being offered for eight months after the meeting, through June 2021, has been lauded as a format our attendees have really appreciated. And, with 400+ CME/CEUs, we are really pleased with both the quality and variety of the content.

One of the unexpected benefits was that this new format also solved the vertical programing issue. No longer will attendees need to choose between simultaneously offered content. You can now consume all of the content, on your own schedule and at your preferred pace. And, of course, not to worry, we are already sorting out how we can improve upon this new format for our upcoming meeting in September 2021.

Over the past two years, we have been working with the Membership Committee and the Community Group Oversight Committee on how to restructure membership and our offerings. We scheduled leadership meetings for each of the community groups that focused on member value. This allowed us to assess trends and work with the ACRM leadership team to implement some of the changes. We also built and maintain the Task Force Index to encourage community group collaborations across ACRM.

We researched, migrated to, and launched a new, cloud-based membership system named my.ACRM.org (based on the iMIS platform) in record time. A process that normally takes 2.5 years was completed in less than six months. This new system gives us tremendous ability to help all our members and our 25+ groups and committees to more efficiently achieve their missions.

We also lowered the membership rates across the board. The breadth, depth, and volume of the benefits have also increased substantially. So far, the results have exceeded our expectations. Our membership has now grown to just shy of 11,000 members — more than triple the year before. This is especially encouraging given that more than half of all associations experienced a decline in overall membership in 2020.

As most of you know, ACRM now has two journals. The first is the Archives of Physical Medicine & Rehabilitation, led by Drs. Leighton Chan and Allen Heinemann, who serve as Co-Editors-in-Chief. Founded in 1920, the Archives turned 100 years old in 2020; had a record number of 2,026 submissions; had a record number of over 2.7 million downloads; and had a record print circulation of 17,572. The Archives of PM&R is also one of the most cost-efficient journals for print advertising in the rehabilitation space and is increasingly sought out as a central place for classified adverting.

ACRM launched a second journal in 2019, the Archives of Rehabilitation Research and Clinical Translation (ARRCT), led by Dr. Jeffery Basford as its founding Editor-in-Chief. In 2020, ARRCT’s accepted articles increased by 81.3% (in a single year) which is exceptional for any journal, but especially because this journal is an Open Access journal and still in its infancy. Perhaps most impressive is ARRCT’s recent acceptance into Pub Med, which was accomplished in just two years.

For our two great journals, our hats are off to the editors, editorial boards, authors, reviewers, staff, and our publisher, Elsevier!

We also launched a new sales structure called ACRM 365 Sales Team, with a new landing page listing ‘all’ of ACRM’s offerings. You can find them here at www.ACRM.org/sales. We hope this will help you easily find, and better understand, all the ways in which ACRM can help promote your products, services, and/or institution.

In addition, we migrated to a new financial accounting system and a new accounting firm to support our bookkeeping activities. You might also be interested to know that ACRM’s operating overhead has long hovered around 6%, which has been possible with ACRM having gone virtual about ten years ago. This certainly was a significant advantage in navigating the perils of the pandemic. With the onset of the pandemic, we were quick to apply for a stimulus loan, the SBA Grant and an SBA Loan, all helping to mitigate a significant loss from the annual meeting.

It was an exhausting year for all, but with truly fabulous results. I want to thank you for being a member of ACRM and for all that you do for the global rehabilitation community. As we continue to work through the pandemic, I want to wish you well and hope you will continue to be safe. We are looking forward to seeing you either virtually or in person in 2021! 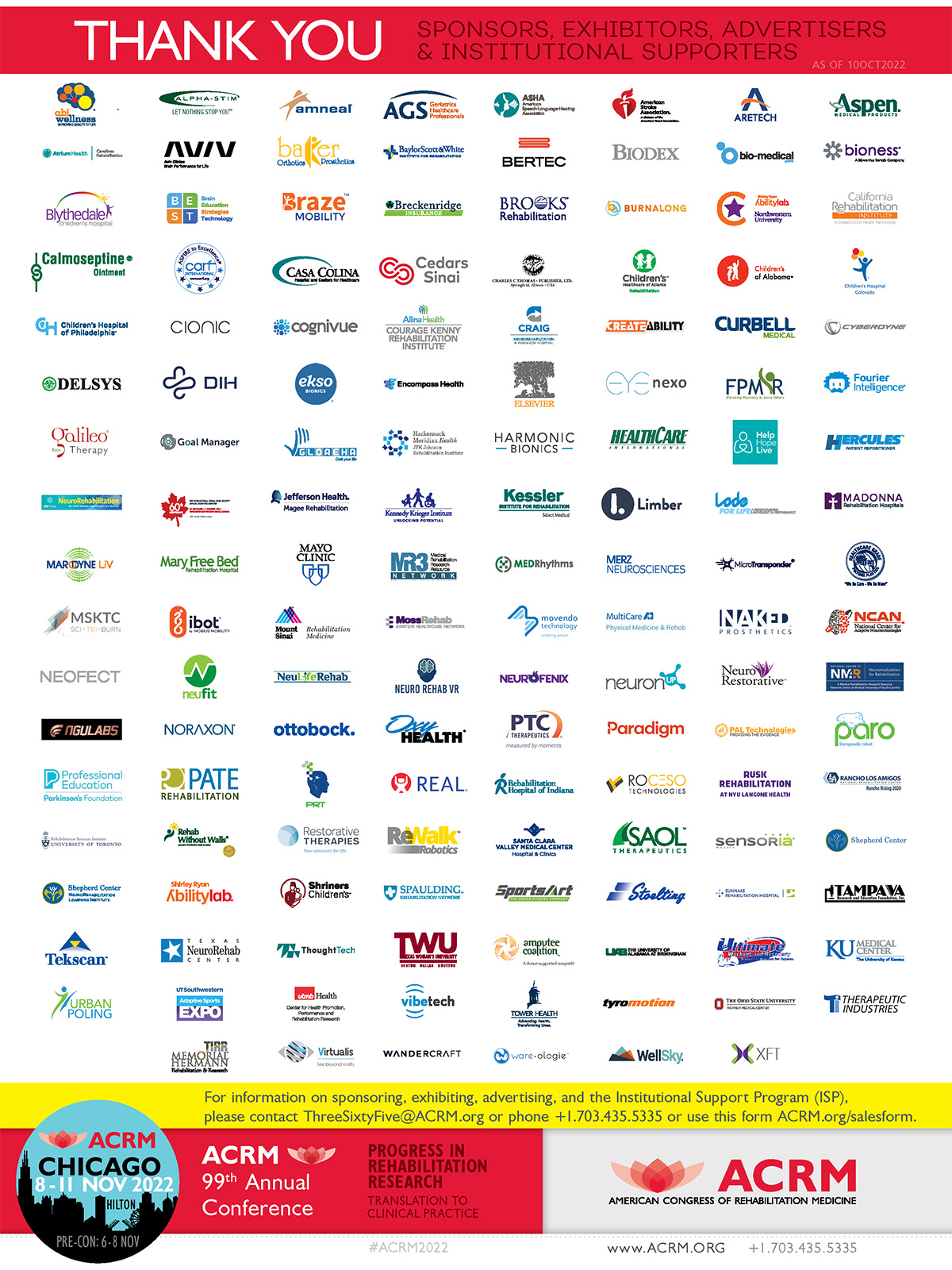