The Neurodegenerative Diseases Networking Group is excited to have Dr. Daniel Corcos join them at the 2016 ACRM Annual Conference, Progress in Rehabilitation Research (PIRR) in Chicago. Dr. Corcos has completed a clinical trial on the effects of progressive resistance exercise in Parkinson’s disease that demonstrated clear benefits on the motor symptoms of the disease as well as benefits of exercise on cognition. He is a principal investigator on a Phase II clinical trial on the effects of different doses of endurance exercise on patients with Parkinson’s disease. He has also published extensively in the area of rehabilitation. Dr. Corcos’ expertise will certainly advance our knowledge related to exercise and neurodegenerative diseases.

Dr. Corcos will be the keynote speaker at this year’s Neurodegenerative Diseases Networking Group Luncheon and will present a talk entitled, Parkinson’s Disease: The Exercise Prescription. He will also speak in a Special Symposium related to the effects of exercise on cognition. Watch for full details coming soon. 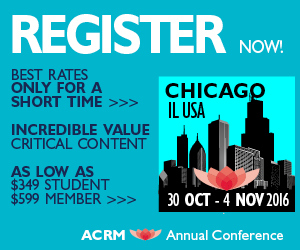 Daniel Corcos, PhD is Professor of Physical Therapy and Human Movement Sciences. He obtained his doctorate degree in 1982 in motor control from the University of Oregon, after obtaining his Master’s degree in psychology in 1980. He completed a postdoctoral fellowship in the Department of Neurosurgery at Rush Medical Center from 1983 through 1987. Dr. Corcos was an assistant professor at the University of Illinois at Chicago from 1987 to 1993, was promoted to the rank of associate professor with tenure in l993, and to full professor in 1997. He is currently a full professor at Northwestern University.

Dr. Corcos has published more than 200 research articles and has been continuously funded by NIH since 1986. He was the recipient of both a FIRST Award and an RCDA. He was selected for membership in the National Academy of Kinesiology in 2001. He has served on NIH study sections since 1994 and was the Chair of the Musculoskeletal and Rehabilitation Sciences Study Section at NIH from 2003 to 2006. He was chair of the Musculoskeletal Function and Speech Rehabilitation study section from 2011 to 2013. He was an Editor of the Journal of Motor Behavior from 1996 to 2014. He is also on the editorial board for the Journal of Neuroengineering and Rehabilitation.