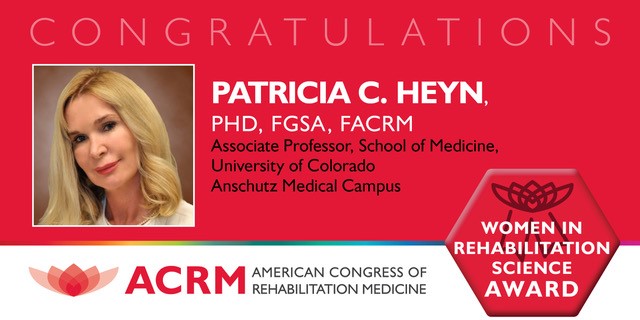 Congratulations to the 2018 Recipient

The ACRM Awards Committee is pleased to recognize Patricia C. Heyn, PhD, FGSA, FACRM, as the inaugural recipient of the ACRM Women in Rehabilitation Science Award.

Dr. Heyn is Associate Professor of Physical Medicine and Rehabilitation at the School of Medicine, University of Colorado Anschutz Medical Campus. Her work on the effects of exercise training for individuals with dementia is highly cited and well-recognized in the rehabilitation field.

Dr. Heyn has several ACRM leadership and mentorship roles as well as in many other national organizations such as the NIH/NIDKK Network of Minority Health Research Investigators (NMRI) and the Gerontological Society of America. Her investigations include the associations between exercise, mobility, metabolic syndrome, cardiovascular risk factors, and cognitive function. She has been involved in several international academic programs and her research was featured in La Nación, Argentina’s leading newspaper and is frequently cited in various media such as HealingWell.com, WIKIBOOKS, ABC 7 News and the Alzheimer’s Association.