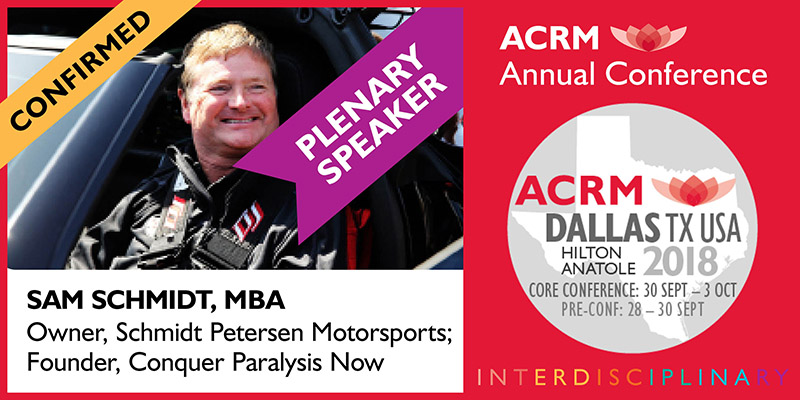 See this session in the Searchable Online Program >>

Sam Schmidt is a former IndyCar driver who endured a massive hit at Walt Disney World Speedway in Orlando in 2000 and suffered an injury of his spinal cord, which rendered him quadriplegic at C4 level. Despite no longer being able to race, Schmidt forged on and created The Sam Schmidt Paralysis Foundation as well as Schmidt Peterson Motorsports. Although Sam remains paralyzed from his chest down, thanks to technology, as well as his determination to find ways of independence, the 53-year-old has been granted a street driving license – the first of its kind. It allows him to drive a semi-autonomous vehicle (SAM) created by Arrow Electronics, a smart, connected vehicle with a human-to-machine interface that Schmidt can operate safely and independently using only the motions of his head. In 2017, Sam established a new record top speed of 190 mph. All of the technology Arrow developed for the SAM Car is open-source and has promising broader applications for independent living. In fact, Arrow and Schmidt are currently exploring the potential of SAM-enabled forklifts, tractors, long-haul trailers and other equipment that can be modified to help expand employment options for disabled veterans. Sam Schmidt is also the founder of Conquer Paralysis Now, a non-profit organization whose mission is to find a cure for paralysis fostering collaboration between unlikely partners in fields like engineering, biology and business.
This session will partner the inspirational voice of Sam Schmidt, an individual with spinal cord injury (SCI) related paralysis that used his driving success to “drive” the field of SCI research, technology and participation with the advanced technological SAM car.

Sam Schmidt grew up in California and attended Pepperdine University, receiving a BS in Business Administration in 1986, and an MBA in International Finance in 1987. Following graduation he became a Hospital Administrator, purchased his father’s auto parts company in 1989.
Sharing his father’s interest in motor sports, Sam raced at a competitive amateur level and in 1993 won the SCCA National Championship in the F2000 series. With a goal to race in the Indianapolis 500, he began driving professionally in the USAR Hooters Pro Cup Series where he finished third and won Rookie of the Year honors.

In 1997, he made his first IndyCar start. He raced in three consecutive Indianapolis 500’s and netted his first victory from the pole at Las Vegas Motor Speedway in 1999, was fifth in series points. During testing in preparation for the 2000 season, Sam suffered a horrendous crash at Walt Disney World Speedway that rendered him a quadriplegic. After leaving the hospital, though no longer able to drive a racecar, Sam was still passionate about the sport. Inspired by meeting paraplegic Formula One team owner, Sir Frank Williams, he founded Sam Schmidt Motorsports which has become the most successful team in the history of the Firestone Indy Lights Series winning seven Series Championships. The team also fields entries each year in the Indianapolis 500 keeping his dream alive to one day win the race … not as a driver but as a team owner. In 2011 he established a full time IndyCar team which has won the Indy 500 Pole Position twice, secured five victories, and finished third in the 2013 point standings.

Shortly after his accident, Sam and a few close friends founded the Sam Schmidt Paralysis Foundation, which was rebranded Conquer Paralysis Now in 2015. Through the years the Foundation has funded research on a global level, provided grants to organizations benefitting the disabled, and continues its nationally acclaimed Day at the Races program providing opportunities for individuals with disabilities. A major focus of the program is encouraging people to find their passion and continue to live their dreams … just as Sam has done.

Conquer Paralysis Now has embarked on a major initiative to spark collaboration among researchers on an international level from various scientific fields to find cures and treatments for paralysis.

May 2014, he drove a Corvette Stingray re-engineered by Arrow Electronics, over 100 miles per hour around the iconic Indianapolis 500 Oval using a head array to steer and a bite plate to brake. Over the next 3 years by advancing the technology, he was able to reach 152 mph at Indy, participate in the Pikes Peak Hill Climb and received the first ever semi-autonomous driver’s license. In 2017 he fulfilled a lifelong dream by racing Mario Andretti in identical Corvettes and pushed the envelope even further by going 192 mph at Nellis Air Force Base. Sam lives in Henderson, NV, with his wife Sheila, and their two children, Savannah and Spencer.

Although significant changes are not anticipated, the schedules, sessions, and presenters posted on this website are subject to change.