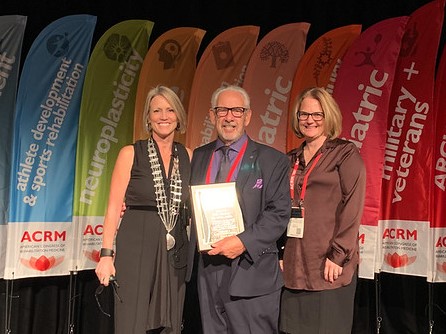 The task force has made some significant international contributes:

Last but not least, the task force retired a legend, Keith Cicerone, PhD, ABPP-CN, FACRM who was recently awarded the ACRM Lifetime Achievement Award for making significant contributions to the field. Thank you, Dr. Cicerone!

John Whyte, MD, PhD, FACRM, Risa Nakase-Richardson, PhD, FACRM and their DOC task force have submitted two contributions, the Minimal Competency Recommendations and the Case Definition for Post-Traumatic Confusional State, to the ACRM Evidence-Based Practice Committee for approval. Once approved, they will work diligently on submitting these works for publication.

They have several plans for 2020, such as completing the DOC Family Education Project and a DOC Outcome systematic review. In addition, there are plans to develop an ABI2020 DOC Course, facilitate continued collaboration between ACRM and the American College of Surgeons (ACS), and tparticipate in the Neurocritical Care Society’s Campaign to Cure Coma Initiative.

Task force members are leading several cross-task force and community group collaborative projects. A collaboration between the Chronic Brain Injury and Cognitive Rehabilitation Task Forces is reviewing articles from the evaluate articles included in the evidence-based cognitive rehabilitation in brain injury review for inclusion of sex and older adults (led by Yelena Goldin, PhD). Monique R. Pappadis, MEd, PhD is leading the efforts of a bibliometric analysis of gender/sex reporting in rehabilitation research. A multidisciplinary team is assisting her in the efforts with plans to complete and publish their results before the 2020 Annual Conference in Atlanta.

Katherine Snedaker, Executive Director of Pink Concussions, and Angela Colantonio are among others who are leading a new task force on domestic violence and intimate partner violence.

The Girls and Women with ABI task force continues to advocate for more accessible participation by persons who have lived experience of brain injury. In addition, they will continue presenting on Capitol Hill and to consumer organizations. New members and projects are welcome!

Lastly, the Task Force is actively developing Information/Educational Pages for publication in Archives, with a goal of submitting four per year.

Three members of the Pediatric-Adolescent Task Force have been recognized as ACRM Fellows for their work in the field of Pediatric TBI and contributions to ACRM. Brad Kurowski, MD, FACRM; Drew Nagele, PsyD, CBIST, CESP, FACRM and Juliet Haarbauer-Krupa, PhD, FACRM were presented with the award at the Henry B. Betts Awards Dinner and Gala at the 2019 Annual Conference at the Chicago Hilton.

The 2019 Keynote speaker for the Mark Ylvisaker Memorial Pediatric Symposium was Juliet Haarbauer-Krupa, PhD, FACRM, Senior Health Scientist in the Division of Unintentional Injury, Centers for Disease Control and Prevention. She presented, Pediatric Cognitive Rehabilitation: How did it start? Where are we now? And Public Health Implications.