The ACRM Fellows Committee and Board of Governors are pleased to recognize Dr. Abiodun Akinwuntan for his outstanding record of professional service to ACRM and for the nationally significant contributions he has made to the field of medical rehabilitation by conferring on him the designation of ACRM Fellow. 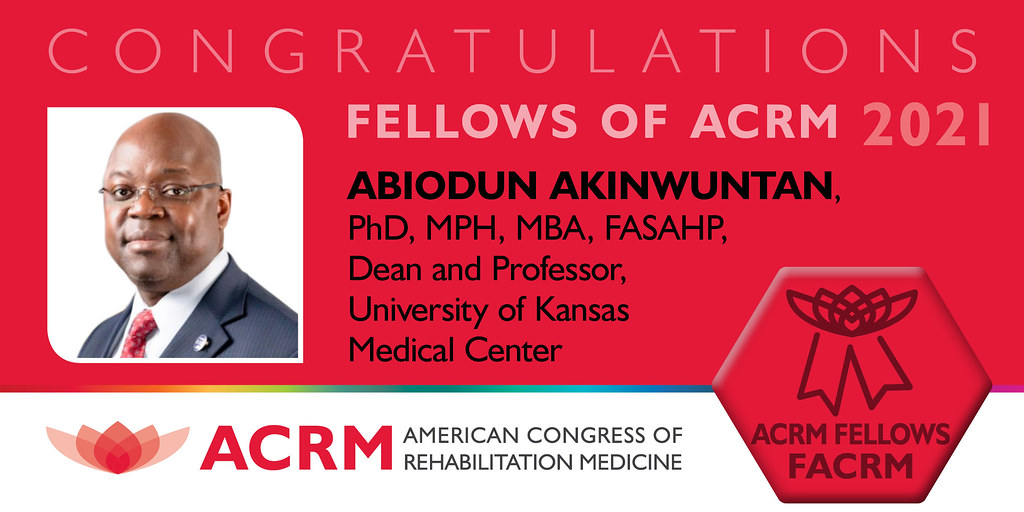 Please join us in congratulating Dr. Akinwuntan. He will be recognized for his achievement at the Henry B. Betts Awards Gala on 28 September during the ACRM 2021 VIRTUAL Annual Conference. All registered attendees are welcome and encouraged to attend.

Dean Akinwuntan, a world-leading authority on the use of virtual-reality technologies to improve daily living activities in neurologically impaired persons, has collaborated extensively on funded grants totaling more than $15 million. He has authored more than 110 peer-reviewed publications and abstracts and authored 8 book chapters. Dean Akinwuntan is a recipient of the prestigious United States Fulbright Scholarship to Nigeria in 2013 and a Fulbright Specialist Award to Iceland in 2016.

He is the editor-in-chief of The Nigerian Journal of Medical Rehabilitation, an academic editor of PLOS ONE Journal, and member of the editorial board for the Archives of Physical Medicine and Rehabilitation Journal. Dean Akinwuntan is a member of the ACRM Communications Committee, Stroke Interdisciplinary Special Interest Group, International Networking Group, and Neurodegenerative Disease Networking Group. He was elected as a Fellow of the Association of Schools Advancing the Health Professions (ASAHP) in October 2020 in recognition of excellence in and contributions to education in the health professions.