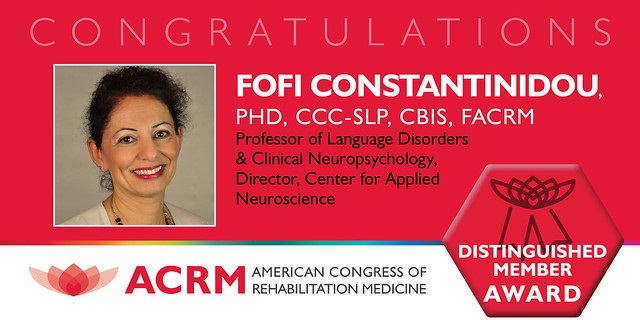 Fofi Constantinidou is the Founding Director of the Center for Applied Neuroscience (CAN) and Professor of Language Disorders and Clinical Neuropsychology at the University of Cyprus. Prior to repatriating to Cyprus, she was Professor of Speech Pathology and Audiology at Miami University, Ohio, USA where she established the Miami University Sports Concussion Management Program. For over 20 years, her research, teaching, and clinical expertise center on acquired adult neurological disorders. Fofi’s current research focuses on the neurophysiological underpinnings of acquired brain injury and aging, their effects on language and cognition, and development of effective neurorehabilitation modalities. She has published and presented extensively in this area and has received several grants for her work from the National Institutes of Health (USA), the Cyprus Research Promotion Foundation, the European Union, and the industry.

Fofi is a member of US, European and International organizations and has held many leadership positions. She has been an active member of ACRM since 2005 and has participated in several ACRM committees and strategic initiatives. Fofi is Chair of the International Networking Group, ACRM’s global initiative contributing to the organization’s international visibility and international representation and content at the annual meeting. She serves as member at large on the Board of Governors, the first member to be elected outside of North America. She also chairs the ACRM Partnership Committee and is a founding member of the Girls and Women with ABI Task Force of the BI-ISIG. She is an ASHA and ACRM Fellow. Fofi is the 2013 recipient of the Experienced Researcher Award of the Cyprus Research Promotion Foundation for her work on the Neurocognitive Study on Aging (NEUROAGE), the first longitudinal study on cognitive aging in Cyprus.